"Would Have, Could Have, Should Have," Says Hastert. Speaker Must Resign Over His Inept Handling of Foley Scandal 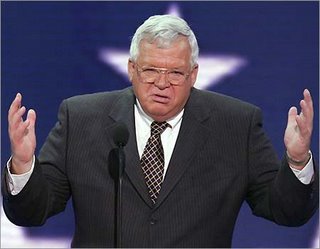 Can you get any more indifferent and flip than, "Would have, could have, should have?" That was House Speaker J. Dennis Hastert's response Monday when pressed whether the Republican leadership should have done more after first learning of Florida Rep. Mark Foley's email indiscretions with underage male pages. In general, many would say Hastert should be stripped of his leadership position simply for repeatedly subjugating himself to the Bush administration and for surrendering to it Congress's constitutionally mandated oversight. But the Foley scandal shines a new light on Hastert's ineptitude, and it's officially time for him to go. Hastert must resign over his colossal negligence in failing to reign in Foley months ago instead of allowing the perverted Congressman to not only keep emailing teens, but to continue serving as--get this--co-chair of the House Missing and Exploited Children’s Caucus. I wonder if exploiting children is considered a qualification for the job??

Hastert clearly has been more concerned with politics than with the safety of our youth. In a critical election year, who doubts that the Speaker conspired with other Republican leaders--Boehner, Blunt, Shimkus among them--to keep this explosive story under wraps hoping that it would go away and not blow up around election time? Shameless, self-serving and morally-challenged, they simply issued a faint warning to Foley to keep away from one former page after the boy's parents complained of improper communication from Foley to their son. And he said ok. And now they claimed they were "duped" by Foley, who "lied" to them about his email behavior. And Foley's checked in to rehab, claiming he was "drunk" when he corresponded with the teens. And everything's being tied up in a nice little bow and swept under the rug, right? Wrong. The political fallout over this scandal is mounting exponentially, and Republicans are shaking in their boots as they ponder their fate in November. Between Iraq, Afghanistan, terrorism, gas prices and prior corruption scandals, the last thing the GOP needs on top of all that is a nice, juicy sex scandal involving grown men and young boys (Rick Santorum, what do you make of that?) just 35 days from the midterms. How will they ultimately deal with this damaging new crisis? It wouldn't be surprising to see heads roll, most likely Hastert's, before Election Day.
Posted by The Ostroy Report at 7:32 AM

Speaker Hastert should go and even the Washington Times is now calling for his head! Never thought I would agree with them!
The ugly face of hypocrisy is now the countenance of the modern GOP.

Anonymous said...
It is wild to hear Republicans defend Foley and Hassert. Repubs on C-Span keep bring up past Dem misdeeds (Barney Frank, Stubbs, Clinton) to make Foley and Hassert (his inaction) seem somehow not so bad.

LISTEN UP REPUBLICANS: THOSE PAST DEM MISDEEDS WERE WITH CONSENTING ADULTS!!!!!!!

THE PAGES WHO RECEIVED FOLEY'S EMAILS AND IMS WERE ALL UNDERAGE.

DON'T PUT YOURSELF IN THE POSITION OF DEFENDING THE INDEFENSIBLE!!!!

what Im wondering is why they all wasntarrested yesterday for aiding and abetting a criminal like theyd do you and me.Now it s turned over to FBI a known bunch thats tied to the bush regime for protection.FBI is the only one thatknows a 16 year old is a minor.just something for Bush and the FBI to cover up.I say the whole group should be in jail this morning-all of them that knew it for a year.was aiding and abeting a criminal