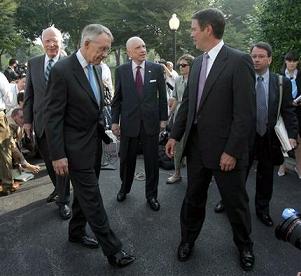 The clock keeps ticking, with the November midterm elections just 35 days away. Democrats seek to regain control of the Senate, and are fighting fiercely in several critical states. Here's how the key battleground states are shaping up according to the latest polls:

-Tennessee: In the battle for the retiring Bill Frist's seat, Harold Ford Jr.'s been running an admirable campaign, and has pulled ahead of Bob Corker by 6 points.

-Missouri: Claire McCaskill and Sen. Jim Talent are in a dead heat at 43, with each candidate overtaking the other every few days.

-Montana: Sen. Conrad Burns has been continuously slipping in the polls, and now trails Democratic challenger Jon Tester by 7 points.

Democrats need six seats to regain a majority and therefore control the most important chamber of the most important branch of government. Several factors will continue to play a major role in this race: the Iraq war, terrorism, gas and oil prices, and Republican scandal. And just this week, two new wrenches have been thrown into the fray: Bob Woodward's explosive new book, "State of Denial," which chronicles the Bush administration's infighting and ineptitude over the war; and the allegations of sexual misconduct involving former Florida Rep. Mark Foley and several underage male Congressional pages. How will all this play out? Stay tuned.
Posted by The Ostroy Report at 9:14 PM

I've just heard that Frist has basically said we can't win against the Taliban in Afghanistan.

I'm sure Corker was glad to hear him say that!!

It is wild to hear Republicans defend Foley and Hassert. Repubs on C-Span keep bring up past Dem misdeeds (Barney Frank, Stubbs, Clinton) to make Foley and Hassert (his inaction) seem somehow not so bad.

LISTEN UP REPUBLICANS: THOSE PAST DEM MISDEEDS WERE WITH CONSENTING ADULTS!!!!!!!

THE PAGES WHO RECEIVED FOLEY'S EMAILS AND IMS WERE ALL UNDERAGE.

WAKE UP! DON'T PUT YOURSELF IN THE POSITION OF DEFENDING THE INDEFENSIBLE!!!!

New Jersey Residents: Tired of the corruption, out of control spending, and skyrocketing taxes?

Menendez was NEVER elected in New Jersey - he was appointed by corrupt Democrats.