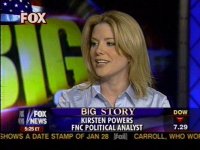 Please tune in to tonite's The Ostroy/DeLaite Report...Where Democrats Play Rough. We'll be joined by Fox News Analyst and journalist Kirsten Powers. Besides her work in the media, Kirsten served five years in the Clinton Administration as Deputy Assistant U.S. Trade Representative for Public Affairs and has worked in New York city and state politics. Since 2004, she's been a Fox News political analyst, where she regularly does on-air battle with Republican opponents on the issues of the day. She appears each Monday night on The O'Reilly Factor to debate conservative columnist Michelle Malkin. She also appears each Sunday on the Big Story with Julie Bandaras. She currently writes a column for American Prospect Online. Her writing has appeared in USA Today, Elle Magazine, The New York Observer, and Salon.

Kirsten recently garnered much attention for blasting conservative author and pundit Ann Coulter for claiming that things were "going swimmingly" in Afghanistan. We'll get Kirsten's thoughts on the news of the day, including the Mark Foley sex scandal, the explosive new Bob Woodward book, Bush, the upcoming midterm elections and Iraq.

THIS HOT OFF THE AP:

Ross Perot was wrong!!! That slow sucking sound you hear is the GOP going down the tubes in the upcoming Mid Terms.

BRING ON THE INVESTIGATIONS...FIRE UP THE JET BABY, IMPEACHMENT HERE WE COME!!! hahhahaha!

Foley showed up drunk at a Page's dorm looking for some lovin.'

The GOP is the gift that just keeps giving and giving.