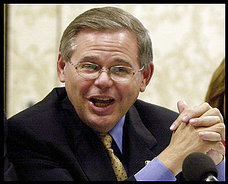 The news just keep getting worse for Republicans. On the heels of the scorching Foley sex scandal comes two new polls released Thursday morning indicating that the GOP's troubles extend beyond the House and into the Senate as the critical midterm elections are just a month away.

Over in New Jersey, where Republicans have been praying that they'll pick up the current Democratic seat from Sen. Bob Menendez, the news is getting bleaker every day. The GOP, concerned that Democratic wins in key battleground states Missouri, Ohio, Pennsylvania, Montana, Rhode Island, Tennessee and possibly Virginia (Dems are ahead or tied in all races) could give them the six seats they need to gain control, are hoping the NJ seat would be the spoiler which keeps the Senate in Republican hands.

But just days after it was discovered that the latest addition to Kean Jr.'s research team is a convicted felon, the new polls show Menendez pulling away handily. The Fairleigh Dickinson-Public Mind poll gives Menendez a seven point lead, an 11-point upswing for Menendez since August. The new Reuters/Zogby poll shows Menendez leading by ten points. It would appear that Kean Jr, whose campaign's been fueled by aggressive smear tactics against Menendez, is rapidly running out of steam.

"Tom Kean Jr.'s efforts to use mud to cover up the fact that he and George Bush are ideological soul-mates on Iraq, Social Security, stem cell research and so many other issues are not working," Democratic Senatorial Campaign Committee (DSCC) spokesman Phil Singer said. "It's time for Tom Kean Jr. to stop the smears and start coming clean about how he thinks George Bush is doing a heckuva of a job."

As the elections near, the Kean campaign has been working with convicted felon Robert Janiszewski, who is currently serving time in federal prison on corruption charges. More troubling for the campaign is that Kean Jr., like most Republicans seeking election or re-election, is quickly sliding off of Bush's diseased coattails. The Fairleigh Dickinson survey showed the president with an abysmal 34% job approval rating in the state.

As the Foley scandal continues to unravel, and with Iraq, Afghanistan, the recent NIE and Bob Woodward's new book creative havoc in the GOP, both the House and Senate are getting more within reach of Democrats than ever.
Posted by The Ostroy Report at 10:55 AM

I just can't let myself believe we have a chance. I hope it's true.

The Republicans are too full of dirty tricks (fixing voting machines and suppressing the vote) for me to have confidence in the election next month. They have the mainstream media (board rooms are totally Republican which control the content)on their side too.

What about Karl Rove's October Surprise? We don't know what it is yet. Knowing how he operates, it will probably be known closer to the election when there is not time to respond.

Don't believe this thread. New Jersey residents are NOT happy about the direction their state, which has been run by Democrats for many years.

New Jersey residents WANT CHANGE and will not support Menendez. Menendez has never won an election in New Jersey and Kean's name is much more popular. Menendez got to where he is by appointment and he hasn't accomplished anything while he has been running New Jersey.

Besides "he's not George Bush", what has Menendez ACCOMPLISHED to deserve election in New Jersey?

NEW JERSEY RESIDENTS: Tired of New Jersey Bullshit? Like the out of control taxation? Enjoy living in the most corrupt state in the Union? If you are in favor of the status quo, vote for the Democrats. If you want change, try Kean or a third party candidate.

4:06 What Menendez has done to "deserve election in New Jersey", if nothing else, is to have sense enough to be a Democrat. The Republican party has created a nightmare for our country which includes New Jersey. I'm sure you're aware of the nightmare, but since you're undoubtedly a campaign-on-the-Ostroy-blog-Republican in denial, anything you read or hear about the corruption of the Republicans is seen through your Kool-Aid induced mental fog.

Yeah, I'm a KoolAid drinker. I ask, what has the candidate accomplished. Your response is that he is in the right party.

If you've had enough, vote for someone OTHER THAN DEMOCRAT.

Carter (from Lawrence in Mercer County) is a minister & former candidate for U.S. Senate in 2000.[2]
Len Flynn - Libertarian Party

Flynn (from Marlboro) is a long-time Libertarian Party activist. Supports reductions in spending, taxes and the size of the Federal government.[3][4]
Ed Forchion - "Legalize Marijuana (G.R.I.P.)"

Smith (from Hammonton) is a retired teacher, Korean War veteran and former member of the Camden County Board of Chosen Freeholders. Opposes abortion, judicial activism and supports veterans services.[8]

DO NOT VOTE THIRD PARTY IF YOU WANT THE RESULTS TO KEEP REPUBS OUT OF CONTROL.

KOOL AID DRINKER ABOVE DOES NOT UNDERSTAND HOW WASHINGTON WORKS.

MENENDEZ WILL WIN BECAUSE NEW JERSEY IS NOT STUPID!!!

A third party vote is like a vote for the Republicans...Nader proved that several times!

Don't let kool-aid drinkers sway you and your vote off the topic...which is to get rid of Republican rule...by saying 3rd party candidates are the better choice.

Has Menendez accomplished anything? Come on Democrats. Let New Jersey voters know what Menendez has accomplished to DESERVE votes?

11:08 I would think it would be enough for NJ residents to know what Menendez hasn't done. He hasn't lied as a routine way of governing; hasn't sent obscene emails to minors; hasn't spied on NJ citizens; hasn't given enormous breaks to corporations at the expense of the workers; hasn't deprived thousands of children of health care; hasn't sent all of New Jersey's jobs overseas; hasn't polluted the NJ air and water; and, he is innocent of other Republican misdeeds I have no time to list. The thinking person weighs both sides when making a decision.

anonymous 2:55,
You are talking out of your ass.

1:52 You're right. The DONKEY is the symbol of the Democratic Party.

"September 28, 2006, will be seen as a step toward ending our constitutional rights of free speech and trial," said Socialist Party candidate for the US Senate, Gregory Pason, at a forum in Highland Park.

"Robert Menendez joined the Republican majority in giving the President the green light to authorize torture, indefinite detention, and to end the right to habeas corpus. It is a scary time for all of us, especially those of us who disagree with the government," Pason said.

Caroline Fredrickson, ACLU's Director of their Washington Legislative Office stated in a recent ACLU press release that "This legislation gives the president new unchecked powers to detain, abuse, and try people at Guantanamo Bay and other government facilities around the world. Unfortunately for America, the Senate chose not to deliberate today. Instead, it joined the House and President Bush in jamming through a hastily written bill before running home to try to campaign."

The Center of Constitutional Rights state on their website, "This ominously broad definition of enemy combatants would mean that almost anyone who actively opposes the President or the government could be locked up indefinitely. This bill makes a mockery of the rule of law. The current version of the Military Commissions redefines an 'unlawful enemy combatant' (UEC) so broadly that it could include anyone who organizes a march against the war in Iraq."

The Military Commission Act (S. 3930) passed the US Senate 65 to 34. The Act:
(1) Authorizes the President to establish military commissions to try enemy combatants
(2) Allows the imposition any sentence "appropriate to the offense," including death or imprisonment for life.
(3) Prohibits any "combatant" under trial from invoking the Geneva Conventions or related protocols as a source of rights in a habeas corpus petition or other civil action brought in a United States court (state, territory, or federal) to which the United States, or current or former employee/officer/armed forces member/agent, is a party.
(4) Authorizes the President to interpret the meaning and application of the Geneva Conventions and to publish those interpretations in the Federal Register as an Executive Order--any such Order would be authoritative as a matter of U.S. law.

Senator Menendez, who has presented himself as a "civil libertarian" has a record of supporting Bush's crack-down on civil and human rights. Without Senator Menendez's (and Senator Lautenberg's) support, the USA PATRIOT ACT would not have been reauthorized, and if Senator Menendez had spoken up about the new Animal Enterprise Terrorism Act, the legislations would have to have been debated, rather than passing "by unanimous consent."

Senator Menendez also supported No Child Left Behind, which gives military recruiter access to all of our public schools.

Socialist Party USA candidate Gregory Pason stands for abolishing the USAPATRIOT Act and other "anti-terrorism" legislation which gives the government authority to detain people without trial and to harass political activists. He has spent years visiting and supporting immigrant detainees, including being a key organizer for the defense of Farouk Abdel-Muhti, a Palestinian detainee who was held for three years without trial until his release was won. Pason has worked file numerous habeas applications for immigrant detainees.

Mr. Pason has also been active in organizing opposition to military recruiters in our schools, including actions at William Paterson University, and is a vocal opponent to the occupation of Iraq.

Gregory Pason is a member of the Bergen County Peace and Justice Coalition, NJ Peace Action, the National Writers' Union and Residents Against Racism.

More information can be found on the Pason for Senate website at: www.votepason.org

This page is fantastic, the infomation you show us is really interesting and is good written. Do you want to see something more? you can visit too: The marijuana careis an original annual plant of Asia,of diverse mountain ranges of the Himalaya.
Head Shop, Herbal Grinders
Bongs, Glass Pipe. Visit us for more info at: http://www.headshopinternational.com/