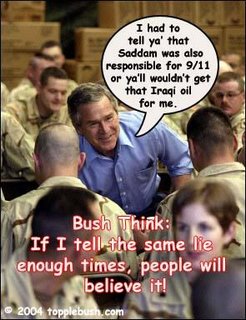 For the better part of the past several years, whenever the news out of Iraq got too negative, the Rovian strategy was to roll out President Bush on a national PR tour to bolster support for his failing foreign policy. There'd be a lot of smoke and mirrors and bait and switch involving the war in Iraq and the war against terrorists. And the strategy usually worked, at least in the near term, towards boosting Bush's approval ratings and diverting Americans' attention away from the war's failure. But just 27 days away from the critical midterm elections, it's clear that this game-plan no longer works. In fact, Bush's recent swing through several states to garner public support for the war and his administration's handling of it, is backfiring big time. Voters are rebelling, as polls increasingly indicate November 7th will likely be a dreadful day for the president and the Republican Party.

-Those approving of Bush's handling of terrorism dropped to 46% from 54% in the past two weeks
-Americans are now evenly divided (41R-40D) on which party they think would better handle terrorism, the first time in Bush's presidency that Democrats didn't trail. Before Labor Day, Republicans had a 42-34% edge
-Bush's job approval rating dropped from 37% to 34%
-83% believe Bush is either hiding something or lying when he discusses Iraq
-57% believe Bush knew of pre-9/11 intelligence reports that warned of impending attacks using airplanes. This is up from 41% in May 2002
-47% of voters now believe Democrats are the party of moral values, not Republicans (38%)

Additionally, a Newsweek poll released last week virtually mirrors the Times/CBS poll on voter sentiments on the major issues including Iraq, terrorism, values, the GOP and the economy. Politically speaking, the numbers are pretty bleak overall.

In short, the GOP has lost its crucial edge on terrorism and values, and is sinking fast in the wake of the Mark Foley scandal and the explosive revelations that came out of the recent National Intelligence Estimate (that the Iraq war has fueled terrorism and made America less safe) and the new Bob Woodward book (that the Busheviks have been in a colossal dysfunctional state over the war, and that they've been lying to Americans about its progress or lack thereof). Voters are clearly disgusted and ready for change. With the Foley scandal having more legs than a centipede, victory in the House and Senate, once a remote fantasy, is now very much a reality.
Posted by The Ostroy Report at 7:14 AM

Buzzflash.com headline linking to this item..
"Americans are Waking Up to the Reality That Bush's "War on Terrorism" Isn't Aimed at Making Us More Secure. It's Only Aim is to Keep Him in Power."
Not the only aim. A primary objective involves arms/oil cartel profit. GREED.
Part of the strategy is to continue the policy and agreement to keep
Iraqi oil in the ground. Likewise this is the aim of the proposed Iran attack which will happen shortly (prior to November elections)

Andy, it's ONLY taken 6 years for these people to wake up. This doesn't show much for the smarts of the American sheepole.

The polls keep looking good for Dems, but I am very concerned that the Republicans will just fix the voting machines and use dirty tricks and intimidation to suppress the vote.

Isn't anyone else concerned about this?

Election night will tell the tale.

"Isn't anyone else concerned about this?"

Hi: I've been writing all over the place (incl. my congressman and senators) about this very topic the past 3 years. Unfortunately, not many people seem to be very concerned.

You know, "Fool me once,...fool me twice... How do you feel about "Fool
me three times?" Be prepared for it!

6:05 ANONA --I'm concerned as probably are many more. I don't know what to do. I live in a red state that is likely to fix the machines and commit other voting fraud offenses, so complaining or writing letters to my congressmen would be futile. The election problem needs addressing on a national and federal level. but how do you get that going? All citizens should be assured of his vote being accurately counted.

9:20 I've been told that The Far Right Religious Conservatives value their status as the only ones on earth who are "saved" and thus going to heaven. Good works do not contribute to their salvation. This belief in theirs being the only way to heaven accounts for their actions good and those we don't understand. If I've (and others in my group) have been given incorrect information perhaps someone will correct it. Their actions are sometimes incomprehensible to those of us with other religions. I've tried to understand Falwell when he appezrs on TV but he confuses me.

Time for a regime change, and mid term elections is the first place to start.

It's been a long time coming,the republican will rue the day they used fear as a weapon of choice, once the results of the midterm electons come around.

Dear President Bush, you are by far the very best President our Nation has ever had. Bold, inteligent, courageous, and determined. Under your leadership the good old USA has become the true bastion of peace, democracy, and equality throughout the World. Keep up the good work for the sake of all of us, our children, and for the humanity as a whole.