John McCain is a Shameless Sellout 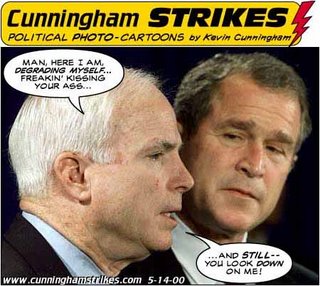 Sen. John McCain has his nose so far up George Bush's ass lately it's a wonder he can still breathe. Like many, I've lost all respect for the guy who once had the balls to tell it like it is and stand up to the president. The quintessential Independent. The guy no one could own. Well that was then and this is now. With his eye on the 2008 presidential election, McCain has been selling himself faster than a hooker at a hardware convention.

McCain's latest pro-Bush salvo has been fired at former President Bill Clinton, for whom he blames N. Korea's recent nuclear missile test. Taking a jab at both Clintons, the Arizona Senator said: "I would remind Senator (Hillary) Clinton and other critics of the Bush administration policies that the framework agreement of the Clinton administration was a failure.... The Koreans received millions of dollars in energy assistance ... and what did the Koreans do? They secretly enriched uranium...We had a carrots-and-no-sticks policy that only encouraged bad behavior. When one carrot didn't work, we offered another."

Sen. Clinton fired back in a statement: "Now is not the time to play politics of the most dangerous kind--with our policy on North Korea. History is clear that nothing the Bush administration has done has stopped the North Koreans from openly testing a nuclear weapon and presenting a new danger to the region of the world." Since 9/11, it continued, Bush "has allowed the 'axis of evil' to spin out of control. Our Iraq policy is a failure. Iran is going nuclear and North Korea is testing nuclear weapons."

And, the William J. Clinton Foundation issued its own statement, saying it was "unfortunate that anyone would attempt to rewrite history to score political points at a time when we need to address this serious threat. For eight years during the Clinton administration, there was no new plutonium production, no nuclear-weapons tests and, therefore, no additional nuclear weapons developed on President Clinton's watch." The statement also pointed out that former Bush Secretary of State Colin Powell endorsed Clinton's policy toward North Korea in 2001.

Over the past couple of years McCain has increasingly sidled up to Bush, shedding his once roguish Independent skin. The man they call the 'anti-Bush' has thrown his support to the prez most notably on illegal wiretappings, tribunals and torture, measures he first opposed (ironically as a much heralded torture victim himself) before being strong-armed by the Busheviks. He's clearly bucking for the president's affection and official seal of approval as the vast field of Republican hopefuls jockey for '08 positioning. Is McCain expecting Bush to hand him the political mantle? Has a secret deal to support a McCain candidacy been made in exchange for the seemingly unyielding support of a distressed presidency? So now we have McCain choosing to ignore six years of Bush's failed foreign policy only to blame Clinton instead for our N. Korea problems. If that isn't proof, I don't know what is.
Posted by The Ostroy Report at 8:02 AM

John McCain is getting to be an expert ass kisser, recall how he kissed Jerry Falwell's ass not too long ago, after, rightly, bashing the flim-flam clergyman for years.
Also he turned on his erstwhile Senatorial ally Barak Obama in a move aimed purely at positioning himself further to the right.
Remember the old Cream Song?
"I'm a poltician....I support the left, but I'm leaning, leaning to the right!"

McCain showed his spinelessness and lack of character when he sucked up to Bush and even let him kiss him after he was abused by Bush during their presidential campaign. I don't want to offend women who are abused, but McCain has an "abused wife syndrome" who sucks up to her abuser after he's kicked her and worse. McCain is worthless as a leader and I hope everyone sees that.

Only a great big naive idiot would vote for McCain for even a dog-catcher... much less give that man any consideration for being president of anything. He is one big fence-rider who has aspirations of becoming the 'chip off bushs` rearend in 2008....and he will dowhateaver it takes to ride in on whoever has a coat-tail to offer. How could anyone vote for a man who was , himself..a prisoner for six years 9( and supposedly tortured ) ..that would vote for bushs` atance for torture of other human beings ? Does this make any sense to anyone at all ? If he is aspiring to be our president ( when we have one just like that in office already ) is to far-fetched to ponder. My head aches from all this double-dealing politickin' that I am hearing on a constant basis. Please. give us something and someone who is worthy of our Time and Consideration. vgf

If he would have ran against Bush in 2004 he would have crushed him, but now people look at him and laugh, that sick laugh of sadness. He can no longer consider himself a proud man, he's a seller and the Bush"atan" has his soul.

Bush kissed McCain in public and he kissed Lieberman. It must be some sort of public symbolic gesture made in public to seal a secret deal they've made. Bush cups the head and does a big kiss on the cheek.

We know it's human nature to project on to others the aspects of our own psyche that we aren't aware of. I'm amazed that so many in the Republican Party think we are so stupid as not to realize we have been lied to, cheated, manipulated and robbed. McCain thinks we won't notice his duplicity. Under the laws of psychology that makes him (and so many others) very stupid.

hey..i am an arizonian and i agree that mccainis one of the worst suck-ups...i am so ashamed of this supposedly 'war hero' and his continually kissing
ass to impress...what a joke...no torture and did he ever back slide on that one plus let bush etal off as war criminals,,,disgusting

McCain is a wus of the first order.

Back in 1999, before Bush had secured the nomination and McCain still thought he had a chance at the Big House, Karl Rove turned his smear machine loose against McCain's wife, Cindy.

Rove, Inc. portrayed her as a "pothead" and "insane." Certainly not fit to be First Lady of the USA.

What did McCain do or say in response? Not a damn thing, that's what.

If someone had so tried to smear my partner, I would've confronted them and possibly punched them in the mouth. But John McCain doesn't feel protective toward his wife.

That's what rank ambition does to you.

More corruption from the Democrats!

After looking the situation over ,looks like they are investigating Foley when they should be investigating bush&McCain Kissing on TV What the hell is going on off Tv.Of course investigations are nothing but a cover-up anyway when you let the criminal investigate himself

McCain is a step below Bush if thats possible.I used to respect believe he was different,i was wrong.he is a weak two faced ass kisser.I hope the Repugs. are grooming this hypocrite for 2008.Be nice to see him thrown in the trash heap.