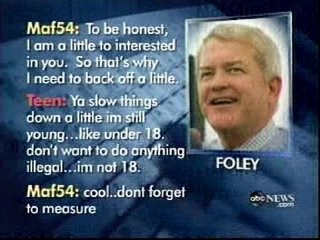 I ask incredulously, is it possible that the two top House Republicans cannot recall discussing the scandal surrounding Florida Rep. Mark Foley's salacious emails and Instant Messages to 16-year-old male pages? That's what Speaker Dennis Hastert and Majority Leader John Boehner would like us to believe. Is perversion and corruption so rampant in Washington GOP circles that it's hard for Hastert and Boehner to remember explosive cases like Foley's? Wouldn't you think that the Speaker of the House, and House Majority Leader, would have as a top of mind matter the legal and political consequences of an embarrassing sex scandal involving one of their own and underage boys?

According to Rep. Tom Reynolds (R-NY), he personally raised the issue with Hastert months ago. Yet the Speaker's office issued the following statement over the weekend: "While the speaker does not explicitly recall this conversation, he has no reason to dispute Congressman Reynolds' recollection that he reported to him on the problem and its resolution." Sure, I bet the conversation went something like this:

Reynolds: "Hey Denny, you're not gonna believe this. Ya know Foley...down in Florida? Been sending dirty emails and instant messages to some teenage boy who used to work for him. Parents are very upset. This could rock the House, Denny. Bad stuff if it gets out. Denny...?"

Hastert: "Ummm...oh...yeah, right. Bad stuff. Sure. Sorry. What was that again? Something bad happened to some kid in Florida?"

Reynolds: "Denny, are you listening to me? We have a gay congressman on our hands who's essentially been soliciting online sex from a minor. Are you grasping the gravity of this situation?"

Hastert: "Gravity, sure. Oh, it's bad stuff, Tom. Real bad. Will get right on it. Check back with me soon."

Of course, Hastert is no forgetful buffoon. But he is a liar. And so is Boehner, whose office said Saturday that months ago he had had a "brief, nonspecific" conversation about the subject with Rep Rodney Alexander (R-LA), for whom the boy worked, but that he couldn't recall with certainty whether he talked about it with other GOP leaders.

To be sure, the Republican leadership was well aware of the seriousness of this situation, and chose to keep it under wraps while letting the randy Congressman continue, unbelievably, in his role as Co-Chairman of the House Caucus on Missing and Exploited Children. (It's no small coincidence that sexually-harassing, child-molesting, pedophile freaks always seem to be involved in organizations involving children. They seek out those roles because that's where the kids are. These predators know all too well where to find their prey).

Hastert and Boehner aren't the only negligent ones among the GOP leadership. Rep. John Shimkus, R-Ill., chairman of the House Page Board, knew about the brewing scandal in late 2005. Shimkus confronted Foley, who assured him and the Clerk of the House at the time, Jeff Trandahl, that nothing inappropriate had occurred. "Congressman Shimkus and the clerk made it clear that to avoid even the appearance of impropriety and at the request of the parents, Congressman Foley was to immediately cease any communication with the young man," a statement from Hastert's office said.

So now to save political face and keep the party from further imploding, Hastert has requested that the Justice Department investigate whether Foley violated federal law by sending sexually explicit instant messages to at least one and possibly more teenage pages. The FBI has begun it's preliminary inquiry into the scandal.

But the bigger issue within the GOP is, who knew what and when. "It's now clear from all the reports coming in from across the country that the Republican leadership team has been well aware of this problem with the pages for well over a year," said Tim Mahoney, Foley's Democratic challenger. "It looks to me that it was more important to hold onto a seat and to hold onto power than to take care of our children."

Democrats are charging that Foley's been protected by top Republicans, in particular Reynolds, through close political connections and financial motivations. Reynolds is chairman of the National Republican Congressional Committee, and is heading the battle to keep the House. Foley's longtime Chief of Staff Kirk Fordham, is now Reynolds' Chief of Staff. And campaign finance records show that Foley's campaign committee gave $100,000 to the NRCC this summer.

And the GOP leadership is hopping on the bandwagon calling for Foley's head. "His immediate resignation must now be followed by the full weight of the criminal justice system," said a statement from Hastert, Boehner and the majority whip, Roy Blunt. But that directive falls far short of taking any responsibility themselves for allowing Foley to continue operating unchecked.

Rep. Christopher Shays, R-Conn., said any leader who had been aware of Foley's behavior and failed to take action should step down. "If they knew or should have known the extent of this problem, they should not serve in leadership," Shays said.

Those poor Republicans. With President Bush's recent Terror Tour kicking his approval rating up a few points, and with gas prices on a freefall, the Repubs were starting to get a little breathing room as they march towards the November midterms. But now it seems abundently clear: these guys are ammoral, unethical and corrupt, and no amount of spin can change that. Foley's sexual indescretions with a minor, and the ensuing cover-up, is simply one more example of why it's time for Republicans to go. Twelve years has been enough of this morally bankrupt party.
Posted by The Ostroy Report at 7:22 AM

Anonymous said...
This comment has been removed by a blog administrator.
1:09 PM

1:09 No one reads the stuff you copy and paste above. Please stop doing it. We got other major stuff to deal with than your stuff.

Just watch: The Repubs will do anything to stay in power and watch what hypocrites they are.

Too bad most of the mainstream media is controlled by corporate board rooms (Big Repubs) which is why they do not do their jobs either.

If Hastert and the other Republicans don't have the mental wherewithal to function in their jobs; and if they don't even have the good sense to have a staff of a secretary and/or an assistant to help them keep track of things they should be removed on that count alone. Then, when they commit the despicable crime of allowing children to be molested, it seems their dismissal should be automatic. Those in the "Values Party" have little regard for the safety of children. Sex is only a disgrace and sin when it applies to those other than themselves. That seems to be their standard for lying as well.

Castration should be a mandatory minimum for first offense sexual predators. Death penalty for repeaters. Unfortunately, I believe the ACLU and California types would gladly spend millions defending the disgusting people who sexually abuse children.

1st off it shouldnt take 23% of everybodies dollar to support the Government.cut out about one half of the government and put the other half on SS cure both problems,pay them exactly like SS pays with SS benefits and have free medicine for everybodyand send all the IRS home,hell it might even cut down on all the wars.and trim some of the fat on everything they sign into law.Make them accountable forwhat they spend every month--then youd have something.Thank You

3:58 THe ACLU and California types probably would defend the accused's rights to a fair trial with evidence to support the charges. Of course the accused would know the charge against him. The basic kind of just and fair trial we had for everybody until the new terrorist-type justice. We wonder what your sentemce would be for Hastert and the rest including John Shimkus who alledgedly allowed Foley to spend a great deal of time alone with the pages even after Shimkus alledgedly knew about Foley's interest in the pages. Castration? Waterboard? Sleep deprivation? Attacked by dogs? or I'm sure at the very least, that they are voted out of office.

So the solution to the GOP is to turn control of Congress back to the Democrats? The same party whose 40-year run of corruption stank so bad that the GOP was handed the keys for the last 12 years?

When are the people in this country who are balancing full outhouses on their necks going to figure out that this country is doomed, unless everybody, and I mean EVERYBODY, withdraws any and all support for these "two" parties, which are simply two heads of a single corporate party that has sold the American people down the river to fatten their bottom lines?

8"52 "It's all relative". No Democratic tenure has ever descended into the depths of degradation as the Republicans during their current reign.

So it only took the GOP twelve years to collapse into corruption as opposed to forty years somehow is equal, 8:52?

Is this more third party propaganda? Which, by the way, has no viable candidate.

Grow-up and smell the smoke. The GOP is going down in flames and there IS NO third party candidate to save the day.

9:11 AM has it right. It's all relative and, frankly, the country was doing a whole lot better on the domestic and foreign fronts under Democrats than Republicans.

Actually it's kind of fun to watch the GOP eat their own and the religious idiots who support them.