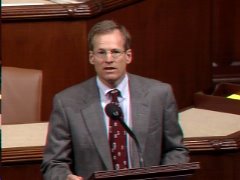 Is there no shame left among anyone anymore in the Republican Party? Are they all just a bunch of morally-bankrupt, self-serving partisan spinheads obsessed solely with preserving their power? Is there no new low that this gang of corrupt thugs will sink to in order to protect their own from scandal and place blame on Democrats, the media and/or anyone else they can find? Have they gotten so drunk with power that lies, deception and criminality is justified so long as it comes from Republicans? Pick up a newspaper, listen to the radio, watch TV news programs and that's exactly what's happening right now. The Republican Party is now officially out of control and running amok through D.C.

On MSNBC's Hardball Friday, host Chris Matthews interviewed two Congressmen serving as surrogates for House Speaker Dennis Hastert, who, along with other Republican leaders including Majority Leader John Boehner and RNCC chair Rep. Tom Reynolds (NY), have been under fire over the who knew what and when of the Mark Foley sex scandal. In defense of Hastert, Rep. Jack Kingston (R-GA) blew off Foley's original communications to an underage male page as "G-rated emails."

And then there was Kingston's partner in television crime, Rep. Jack McHenry (NC), in an attempt to blame Democrats for allegedly sitting on the Foley news until weeks before the midterm elections, telling Matthews: "This is not about Denny Hastert. It's about the perverted acts perpetrated by Mark Foley, and the only question that remains is, what did the Democratic leadership know and when did they know it." Can ya believe that? These guys control every ounce of power in Washington, control every single House and Senate committee, and somehow it's the Democrats who are responsible for this outrageous cover-up?

McHenry then went on to reiterate his challenge to Minority Leader Nancy Pelosi (CA) and DCCC head Rep. Rahm Emanuel (ILL) to "submit themselves under oath," a challenge he has yet to make to Hastert, Boehner, Reynolds and the other Repugs involved. We always knew these guys were good at bait and switch and swift-boating, but, turning this into a Democratic scandal? Thankfully, as several new polls indicate, voters have finally had enough of this colossal bullshit. The Repugs' reign of terror is likely going to come to an end in just 31 days.

A new Rasmussen poll shows that 61% believe the Republican leadership acted in a cover-up to protect Foley. More troubling, an astounding 31% of Republicans believe that as well. A new Time Magazine poll has 64% of voters saying it was a cover-up. And in a new AP/Ipsos poll which asked how important corruption and scandal in Congress will be at election time, a whopping 48% said "very much" or "extremely." 16% said "moderately." That's 64% who will close the curtain behind them and pull the lever with Repuglican corruption on the brain. Glory freakin' Hallelujah.
Posted by The Ostroy Report at 9:05 PM

Hey, you're doing a good job. I saw Hardball as well. I usually can't watch it, as Matthews just tosses softballs at people like Tom Delay. I was really surprised at how he came back at the two congressmen.

If the Dems had their act together, the local people in their districts, especially of the nimrod who called the emails "G-rated," they'd have transcripts of the comments along with text of the emails and have it called into every talk radio show in his district.

That thing on Hardball last night was one of the most bizarre, surreal things i have ever seen. Truly Orwellian.

What heppened on Hardball?

Seems to me those emails and instant messages were R-(epublican) rated.

I'm wondering what has happened to all the Republicans who used to regularly post on this blog defending the Republicans and bashing the Democrats. Have they seen the error of their ways or are they unwilling to listen to what is now the irrefutable evidence that they should not be re-elected in any race for any position.

Has the entire Democratic Agenda turned to Foley Bashing?

Is this the only thing Democrats have to offer?

Foley is a disgusting pig who deserves to be prosectued to the fullest extent of the law, but the Democrats are basing their entire campaigns on "I'm not foley" and "I'm not Bush".

Do the Democrats have any ideas of what they want to accomplish or how they plan to protect Americans?

It's funny to hear it said that the Democrats have nothing to offer. Democrats all across the country have staked out positions on the war, the environment, conservation, the notion of offering a truly representative government, not one soley serving the wealthiest and most powerful.
Many democrats have supported less dependence on fossil fuels and the devlopment of new enregy sources.
Many Democrats support ending the war in Iraq and really turning to the real war on terror.
One thing Democrats have not done is that, unlike the Republicans, they do not have a strict party line with endless, inane "stay on message" replies as so many Republicans do en masse.
There are many very clear differences and the Republicans don't look so good by comparison.

11:11 Of course you seem to forget the Republicans ran, totally, on bashing Clinton for adult consensual sex which morphed into family VALUES and "we're not like CLinton." You're lucky the Dems haven't been throwing that bit of hypocrisy at the Republicans. And don't even think about mentioning that Clinton lied which the Republicans say was the crime.

Anon: "Do the Democrats have any ideas of what they want to accomplish or how they plan to protect Americans?"

Al-Qaeda didn't start taking our freedoms away, it was the Bush administration that did that. The Bush administration has also taught Americans to hate Americans. -- In light of that, even if the Dems have no ideas and no platform... at least they're not hell bent on removing the very 'freedoms' they claim to be so bothered about. Anything is better than this Bush administration... and I mean anything.. it's a fuckin' joke.

How are we any safer.. when our leaders knowingly use flawed intel on it's own population to mislead them into a war in Iraq. -- And why would they knowingly push flawed intel upon us and get us into a war that seems to be inciting more terrorism than it's stopping.

The Bush administration and terrorism are symbiotic. As long as there's a Bush administration.. there'll be a war on terror and a bunch of terrorists that we should be fearful of.. and it'll be used as justification to continue stipping our freedom away whilst cloaking their own activities in secrecy. --- Everything that a govt for, of and by the people shouldn't be about.

If the terrorists really wanted to take our freedoms... then the Bush administration has been their biggest ally.

Now we finally see a press that is starting to ask the hard questions. I think the polls have a lot to do with the mainstream press finally doing its job.

And Fox News is a joke. I mean no disrespect to the Amish killings, but what would Fox have talked about last week if it wasn't in the news? I switch over during prime time and they never are covering what is going on in the government.

Check out Keith Olberman on MSNBC (8:00pm eastern). He is excellent. I hope he doesn't get pulled for telling the truth and asking all the right questions.

I hope that Keith Olbermann doesn't suffer the fate of the Russian journalist who was critical of Putin.

How about them asking Bush to go UNDER OATH about his involvement in 9/11,

which he REFUSED to do in front of the 9/11 Commission,

which he resisted forming for OVER A YEAR, until the 9/11 widows raised