Bush Predicts GOP Victories in November. If That Isn't the Kiss of Death for Republicans, What Is? 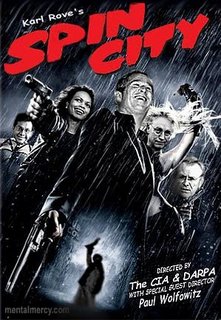 President Bush said he sees victory in the midterm elections for Republican Congressman and Senators. Does he also see the Easter Bunny and the tooth fairy as well? The man who couldn't possibly get any more delusional just got, well, more delusional. That's a sure-fire kiss-of-death for the GOP. Bush has been wrong about everything foreign and domestic. He's become a pariah in his own party because of it. He's also been very good at the "if I say it, it must be true" game. But he's always wrong. So when he sees victory, assume the opposite will occur. And that's great news for Democrats.

"We’ll have a Republican speaker and a Republican leader of the Senate, and the reason I say that is because I believe the two biggest issues in this campaign are, one, the economy and the economy is growing," Bush predicted Wednesday in a Rose Garden fantasy moment with reporters.

"Democrats will raise taxes. Now, I know they say only on rich people, but that’s in my judgment--having been around here long enough to know--it’s just code word: They’re going to raise them on whoever they can raise them on." Aha! Another sure sign that Republicans are going to lose. With all the disasters surrounding him over Iraq, Afghanistan, Foley, etc., he's choosing to play the tax card. Can you say, diversion? But will voters care one iota what Bush has to say right now about what Democrats will or won't do if elected? I think they're too busy worrying about what Republicans will do if Democrats aren't. All recent polls show that Americans are fed up with the GOP-led Congress and believe that Democrats will better handle Iraq, terrorism, education, health care, and yes, taxes.

"The fact is," said Rep. Steny Hoyer, the Democratic Whip "this is the most fiscally irresponsible administration in American history."
Posted by The Ostroy Report at 7:48 AM

Sad to say, maybe Bush knows that they will fix the voting machines and use dirty tactics to suppress the vote.

Or maybe Bush knows that Americans understand the GOP is bad, but the Democrats are worse.

Yeah, right. As if anything any Democrat has ever done is anywhere near as bad as what BushCo. had done to this country in six years. LOL. Wake up.

So how many states are you voting in this year?

When Gore was announced as winner on TV, Bush looked puzzled and bewildered because he knew the election was his because they had seen to that. Jeb had done his job so it had to go to W. Then, they knew about Ohio and as quickly as Kerry conceded it was almost as though he knew it too. I believe the election next month is fixed for Republidans to win. Too much is a stake for them not to see that they win.

While Laura is polishing up her horse milk jokes, Bush is at this very moment, down on his knee's praying to satan for more help.
The banks are getting Hillary and Gore ready to take the WhiteHouse while Cheney and his mafia Corp. get ready to add some more dead to their blood cult of death. [except Cheney's wife, she just writes books on rape, lesbi friends and bestiality, all the good things that have made America the great nation it is today]

Hail satan.
America's true lord and god of light. Hail satan who is indeed in the details.

Get down on your knee's America, thrust your satanic devil horn fingers in the air and kill some more children for your sweet caring god of hell.

And it's the same ol' vitriol as usual.

Let's remember that the GOP is still in power and will be until the polls close on election day. Most likely that will be a different story on that next Wednesday morning. Why should the DEMS waste their time on ideas that will be negated or stolen by the mess of a party - the republicans?

What the DEMS need to focus on is how and when to start impeachment proceedings against the most crooked and corrupt administration in memory in January of 2007.

Does this mean that ID for voting and other measures are not necessary? No. What it means is that if the GOP wins there is a very, very good chance that this mid-term election has been compromised.

Don't forget there are a miriad of lawsuits regarding election irregularities still pending from 2000 and 2004 that have not been heard in court.

Look at the really BIG picture and it looks very dangerous to be a GOP now. And it's about time!

Sheesh!! When will Americans wake up to the fact there is NO DIFFERENCE between DemocRAT and REPUGlican politicians? They are all in collusion and committed to destroying our Constitution! Many people believe Al Gore will run and win in 2008 but will it matter? He's a CFR member also. This two-party hoax is simply a divide and conquer device placed by those who are really pulling the political puppet strings, and controlling the vote counting. WAKE UP!!!

for ALL I CAn STAND

and don't miss this

"HBO to Premier 'Hacking Democracy' Just Prior to November Election!"

Think things have gotten bad for Diebold and friends? Something tells us they're about to get a whole lot worse."


all the facts you can stand
mick

Why anyone would be against oversight in their government only shows that they put Republican Party before country.

How sick! This thinking is going to destroy our country.

1. The integrity challanged electronic voting system was forced onto States by HAVA. HAVA was written by none other that confessed fraudster Bob Ney (R). Attempts by Dems to mandate paper trails and open source software were ignored. We now have a system that is open to abuse and manipulation.

2. The "War on Terror", in large part, is a MI5, DOD, ISI and Mossad construct meant to make the electorate pliable and further the militarization of energy transport choke points and resource rich areas of the globe.

3. Peak Oil is real and is here now. The effects of peak oil on all industrialized societies cannot be underestimated. Unending economic growth, necessary for the fractional reserve banking system to function, is not sustainable without ever increasing amounts of cheap and plentiful energy. We are at the top of Hubbert's Peak and the slide down the other side of that bell curve will be filled with unpleasant realities.

An interesting Google video lays it out. Watch it and understand what is motivating the policies we are living with.

We could go back to butterfly ballots, but Dem voters seem to be too stupid to figure them out.

America is NO LONGER A DEMOCRACY and some people are "too stupid" to see fact over fiction.

And the fact alot of America's Christians are planning not to vote at all, will only hand the republicans another excuse for a false victory by default.

America's religious community had better fix the problems that they in fact have allowed to occure by putting aside their love of riches and tax breaks or the troubles they that they will again turn a blind eye towards will rise ever stronger.

Bush has that little smirk on his face like the cat that swallowed the canary.I don't trust the little bastard.Will it be hacked voting machines again or unlawful strike and killing of thousands in Iran.

THE FIX IS IN. Americans also know that Democrats are the ENABLERS, and that is just as bad as being the criminals. So, people will not see much change coming with Democrats in power (Pelosi already said they aren't going to impeach Bush) especially after the last six years, and many may opt to stay with the "devils they know." The Democrats screwed themselves because they have no balls.

Wow, Popeye has resorted to spewing insults - how productive.

The nation has many problems generated by both Republicans and Democrats. However the onus appears to be predominately on the GOP for duplicitous behavior.

The pendulum is swinging and we suspicion that housecleaning of Congress will begin after the mid-term elections.

If you want change then the logical step would be...come on, think... that's right...vote for the other guys. And please don't muddy the waters by thinking that a third party would do any drastic good. That's just giving the GOPers another chance.

Don't act too surprised on this blog about people 'spewing insults'. The entire liberal mode of operation is the spewing of insults to any dissent of their socialist agenda.

4:25 Of course the way the Republicans SwiftBoated all the Democratic candidates with lies and character assassination was not to be called "spewing" insults. You're right. I can think of a more descriptive word to describe their behavior. And for your infomration the Chrisitan religion teaches the socialist concept of those who have sharing with those who have not. Sorry to have offended you with the Truth if you are an atheist or Religious Right person. I wasn't spewing an
insult -- just pointing out a fact.

Without taking over either the House or the Senate the Dems will not have any power and there will continue to be no oversight.

That is the whole issue before us. Do we want to continue down the road of corruption, lies and illegal deals with holding no one responsible or do we want some oversight so as to hold people accountable?

Popeye is All I Can Stands. And Popeye has been spewing insults.

I totally agree with the first commenter. If Bush is so sure of this they will stop at nothing to steal the election. That is why the Democratics need to get out there and VOTE!!!! Let's outvote them enough so it will be so obsvious if they try and steal it.
We have only our lives to lose if we don't possibly.