NY Post Endorses Hillary Clinton for 12 More Years. Just What the Heck is Rupert Murdoch Up To? 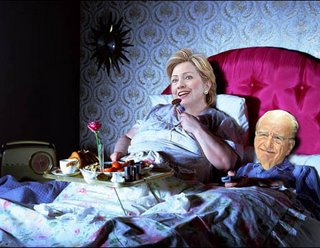 On any given day, the New York Post can be viewed as a vehicle for the Republican Party to spread its pro-Bush, anti-Democrat rhetoric. So it's kind of a surprise to read in its editorial pages Monday that it endorses Sen. Hillary Clinton's (D-NY) bid for re-election. Not for another term, mind you, but for two more terms...until 2018. Has the Post turned a corner here in a desire to be more fair and balanced, just like its sibling at Fox News (that's sarcasm, folks)? Or is this part of some master plan by Murdoch, the likes of which we've yet to figure out?

The editorial, titled "Clinton: 12 More Years," expresses surprise itself that the staunchly conservative paper would be going out on a limb for Hillary, whom it cites as having more of a "centrist" record than not--particularly on national security issues. It said that her Republican challenger, John Spencer, "isn't a credible alternative", and that "Mrs. Clinton, well, she's been a pretty good senator--popular with her colleagues and as productive as a first-term legislator from the minority party probably can be."

The paper also raises the specter of a Clinton run for the White House in 2008: "Well, New Yorkers simply expect their major officeholders to be presidential aspirants--and the pols always rise to the bait."

As I've said all along, the Repugs would absolutely love to see Clinton run for president. The Swift Boats are fully gassed, stocked with Kool-aid, engines running and ready to launch. Is the Post's endorsement and unabashed lovefest part of Murdoch's grand plan to help make Hillary the nominee? You have to admit, something smells awfully fishy here....
Posted by The Ostroy Report at 8:01 AM

Anonymous said...
This comment has been removed by a blog administrator.
9:00 AM

The above, long, boring piece appears to be pure SPAM having nothing to do with the post in question.
This so called "fair" tax is nothing of the sort. It is a stupid idea and the above mentioned piece is nothing but an attempt to plug yet another radio talk show, I guess there just aren't enough of them already!

Perhaps Murdoch is hedging his bets.

Even wall street is moving money to the Dems.

Now it all depends on GOTV.

The Republicans want Hillary to run because they know she cannot win. The religious right, who says a wife should obey her husband without question and who thinks a women should not be ministers; and, even that a woman should be a stay-at-home-mother, will certainly not vote for a woman, let alone Hillary. Then to make sure she's not elected they will Swiftboat her. They've already started some of it with the lesbian charges that were printed in the tabloids. They will dig up lies about Whitewater; her brother; her statements when she was a Republican; her voting for the war in Iraq, then criticizing Bush, how she was humiliated by Bill; and I'm sure a long list of other slurs. She hasb't got a chance because most of the Dem. Liberals are disgusted with her leaning toward the middle(right) and her opportunism. So she'll get few Rebuplicans and only some of the Democrats.

As a woman I find what the religious right thinks of people like me disgusting.

Women should never run for president?

I don't know where you get the idea that Liberals are disgusted with Hillary. She raises tons of money and Dem women love her. Politicians who voted for the war were misled just like the American people. Many have said if they knew what they know today they would never have voted for it. They were lied to just like the rest of us.

I think 1:49 is totally wrong about Hillary. She is not as disliked in the Democratic Party as he thinks she is.

As for the Republicans: They all make me sick.

2:05 The point, I think, that 1:49 was making is that Hillary cannot win and we can't take a chance on her. If she loses all is lost. Let her run when the outcome is not a matter of the life or death of our democracy. She's young enough to wait. Women should run for President but out future should not depend on their winning, at this time in our history. Women haven't even had the vote for a century.

Hillary has never said that if she knew what she knows today she wouldn't have voted for the war. She has never said that. Not only that, no one is excused for voting for the war because when they voted they abdicated their responsibility as the body to declare war. And, I, and thousands of others knew there were no WMD; knew, as Ivins told us in her bio of Bush, that he couldn't be trusted; knew we should give the inspectors more time and that Bush wouldn't comply with that; and knew we wouldn't be greeted with flowers and songs. If we the man on the street knew that why didn't our elected reps? I'm a Liberal and know many more like me who are not pleased with her governing. Who could dislike her personally?

anonymous 2:05,
You are a sexist pig. You would vote for someone because of their gender? You are sexist.

Hillary and Lieberman had identical votes 80% of the time, yet Lieberman should be aborted and you embrace Hillary because she is a woman.

8:59 Who ARE you who keep repeating the Lieberman/Hillary rant? And who ARE you who coninually misreads comments on thei blog? 2:05 Said Republicans make her sick - not men. And she didn't say she'd vote for a woman because she was a woman. You're doing what you Republicans are doing when you twist Kerry's words.

In the developed world, virtually every profession makes use of computers.
However, certain professional and academic disciplines have evolved that
specialize in techniques to construct, program, and use computers.
Terminology for different professional disciplines is still somewhat fluid and
new fields emerge from time to time

baby care is not the meaning of only physical care of baby but also think about the Perception
and sensory development,Communication and languagedevelopment,Cognitive development,Emotional
Development ,Social Development.

business cards and postcards from http://www.printsmadeeasy.com are great!

this blog is awesome, i love the layout! if you're interested, there's some great postcards at http://www.postcards.com

Informative details on history of viagra confirm that the anti-impotency drug Viagra was actually developed by researchers with the purpose of curing angina but incidentally during clinical trails, the drug was found effective in treating erectile dysfunction in men. With clinical results demonstrating the powerful effects of Viagra in triggering off erections necessary for sexual intercourse,impotency afflicted worldwide opted for the medication and the viagra phenomenon also offered suitable assistance to them in countering erectile dysfunction. Slowly and gradually Viagra has developed a deepest level of relationship with men which has further led to an indelible association between viagra and sexuality. And right now viagra and erectile dysfunction related tidbits are popular throughout the world and erectile dysfunction afflicted men worldwide are administering Viagra under medical supervision.

I had my first headhunt in the curikudos job fair held in 2006. And now i think its time to switch over. Can some one let me know when the job fair starts again.