Frank Rich and Andy Ostroy on Same "Page" About FoleyGate, Gays and the Republican Party 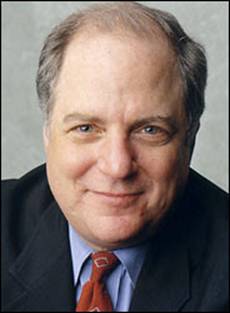 The venerable NY Times columnist Frank Rich is infinitely more talented and prominent than this writer. But this week we have very much in common. On October 12th I wrote a piece titled "FoleyGate Will Result in Greater Acceptance, Tolerance and Less Vitriol Against Gays By Republicans." Rich's op-ed Sunday Times is titled "The Gay Old Party Comes Out."

Earlier this past week I wrote: "Aside from perhaps being the proverbial House of Cards that brings down the GOP power chokehold, the Mark Foley scandal is a watershed moment in terms of how the Republican Party deals with homosexuality going forward....The importance of FoleyGate is that it shines a spotlight on the simple reality that the party with the loudest anti-gay voices is also the party that's filled with gays on every level, from staff member to Congressman to, as rumored, chairman of the party itself...The Foley scandal has proven to America that gay life is just as much a part of Republican life as it is in liberal circles. The only difference is that among conservatives it's more closeted and repressed... The true long-term significance of FoleyGate is that it proves to Mr. and Mrs. Joe America that the elephant is just as gay as his donkey colleague... As a result, I suspect the Republicans' push towards outlawing same-sex marriage and limiting other civil rights for gays will be muted at best and maybe even non-existent...The gay skeleton has been let out of the GOP closet. And he's not going back in."

Rich's piece Sunday included the following: "If anything good has come out of the Foley scandal, it is surely this: The revelation that the political party fond of demonizing homosexuals each election year is as well-stocked with trusted and accomplished gay leaders as virtually every other power center in America...Yet it is the same party's Congressional leadership that in 2006 did almost nothing about government spending, Iraq, immigration or ethics reform, but did drop everything to focus on a doomed constitutional amendment banning same-sex marriage...We must hope as well that this crisis will lead to a repudiation of the ritual targeting of gay people for sport at the top levels of the Republican leadership in and out of the White House."

I have a tremendous amount of respect and reverence for Frank Rich and consider him one of America's most prolific political writers. Which is why it's an honor to be on the same page (pun intended) with him on this issue. And while we're on fantasies? Perhaps Rich is an Ostroy Report reader who was inspired on October 12? I guess we'll never really know...
Posted by The Ostroy Report at 11:01 PM

Anonymous said...
This comment has been removed by a blog administrator.
9:14 AM

Nothing stops Neil Boortz from his dreary drum beat that no one on this site is interested in. Why do you think the Republicans will suddenly become honest, admit to gays in the administration, level with Americans and all will be well for homosexuals? When they have not yet admitted their lies about WMD and every other deceit, why do you think they will not still continue to placate the Religiious Right and continue to fight gay marriage and all gay rights. And, you can be very very sure those Religious Right fanatics will not drop this because they don't care how entrenced gays are in the life of our country. They will not let up and the lying Republicans will continue their charade. I also think it's very sad that those prominent gays in the Republican party who serve our country do not have the guts to come out and let the light shine on who they are. They're as spineless as McCain and the others who keep the deceit in play.

I know right wingers who say that gays should not even hold office.

They want to purge the Repub Party of gays.

Who will be more accepting of them? The rest of America, but not the current Repubs.

anonymous 10:46,
You are a propagandist and a liar. I bet you are one of the typical Democratic closet racists too.

5:21 Did God speak to you, as most Republicans claim He speaks to them, and tell you that 10:46 doesn't know any right wingers and that he's a liar. That's the only way you'd know that.

God didn't have to tell me that he is a lying propagandist, one simply can determine this from looking at his post. He may know some Republicans who want to purge gays from the party, but that is more a point regarding the company he keeps and the friends he has than it is a reflection of the GOP. You cannot be arguing that anonymous 10:46 knows MOST republicans and that the GOP wants to purge gays from the GOP. If you ARE arguing that the lying propagandist who posted as anonymous 10:46 is making an observation that is reflective of the entire GOP, then I can argue that NAMBLA (Man Boy Love Association) liberals are reflective of the entire Democratic party.

OK, so by your hypothesis, if I know liberals who are part of NAMBLA; then I can conclude, based on the liberals I know and the fact that so many liberals are Democrats, that the current Democratic Party is more accepting of Man-Boy sex than most Americans. This would be my conclusion based on the personal information I have and the public facts about liberal opinions of gays.

Does that work for you?

Right on. 6:32 You can conclude anything you want without being considered a liar. You can come to a very stupid conclusion using faulty logic but it is a conclusion not an effort to deceive. Your thinking was faulty. You missed the whole point of my post. You simply were not talking to the point being made differentiating between reaching a conclusion and lying.

...and I'm using the same methodology to come to my own conclusion, but you claim that my conclusion uses faulty logic.

The post you are defending is taking a few 'republican' friends that the schmuck happens to know, and extrapolating the opinions of his friends to define half of the country. Doesn't this seem like some 'faulty logic' that you are so kean on spotting?

12:38 This is the last time you a.h. He was NOT LYING, he was drawing a CONCLUSION. We are not talking right or wrong conclusions - we are talking your calling the poster a liar. Don't you understand anything??????

Anonymous 10:46,
Who specifically do you know that is:
1. A 'right-winger'
2. Believes no gay candidate should hold office
3. Gays should be purged from the GOP ?

If you are lying, who do you know? You don't have to give names, you claim to know more than one. Tell me your relationship with these people. Are they your brother? Friend? Butcher? Priest?

And how did you get this information from your right wing, homesexual purghing, friends?

ANONYMOUS 10:46 is a propagandist and a LIAR

And Anomymouse 2:25 wishes he were Nancy Grace.

Anonymous 10:46 is a liar and a propagandist.

Anonymous 11:04 is a weakling appeaser for lying propagandists.

10:49 Dear Mr. Snore. I'm sure in your world what you say is true and that of your friend 2:25. We totally understand and pray the food is good where you are.

The food is great here, thanks. I wonder, are you praying to the God of Abortions? Does the God you pray to support your baby killing ideals?

9:43 You blaspheme. Don't you know there is only ONE GOD? There are of course idiotic ideas about the nature of God, but there is only one God. Find a church that teaches the Truth unless you've been brainwashed - but then how would you know? Ask somebody you trust, so long as he's not brainwashed, how many gods there are.

9:45 What would be ideal would be that no teenager gets pregnant because of lack of good parenting; that no teenager is threatened by a father who would "kill her" or "kick her out of the house" if he knew she was pregnant; if sex education were taught in school; if so many fathers didn't sexually abuse their children and neighbors; if women in this country were treated equally and not considered as sex toys; if pronography weren't a booming business; were spousal and boyfriend abuse which. among other things, leads to coercion (like unwated sex by the woman, or without condoms) not widespread; if some poor didn't feel that one more baby would lead to starvation for them all; if rape didn't occur so often; if birth control were more accessible; if boys were taught to respect girls; and if all threats to the mother's life were cured and a woman wouldn't die if her pregnancy continued.

And, I wonder if God condones men killing doctors who perform abortions? Are you saying some murders are all right? And by the way, some men insist on their partners getting abortions.

So, come out of your little hole in the ground and look at the large picture; and, know that before abortion was legal women and girls died on filthy kitchen tables where abortions were performed by quacks. OF course then as it is now the rich could always travel to another country to get their safe, medical abortions. So, again, you Repubulicans are targeting those without resources.