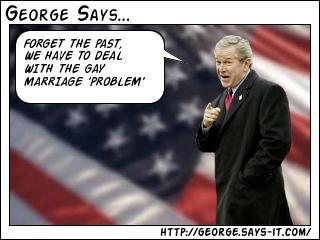 The Bushevik BooGAYman has reared its ugly head once again. Weeks ago following the Mark Foley scandal, I held out hope that Republicans would find a new-found acceptance and tolerance of gays now that they saw just how much homosexuality existed within their own party. We here at The Ostroy Report do play rough, but we also sometimes play naive. So go ahead, say I told ya so. But I'm not giving up on humanity yet. I guess I still have faith that in my lifetime we'll see an end to racist, prejudicial rhetoric. But not this week. Following the New Jersey Supreme Court's ruling on gay marriage, President Bush and the GOP hate-mongers were out in full force gay-bashing as aggressively as ever.

Campaigning Monday in Iowa for House candidate Jeff Lamberti, Bush said, "Yesterday in New Jersey, we had another activist court issue a ruling that raises doubts about the institution of marriage," adding that marriage was "a union between a man and a woman....I believe it's a sacred institution that is critical to the health of our society and the well-being of families, and it must be defended." Oh really George? How come you didn't feel so strongly about the great institution of marriage last week when you took to the stage in Pennsylvania, embraced Rep. Don Sherwood--who recently admitted to having an extramarital affair, in which his mistress accused him of beating her--and declared: "I'm pleased to be here with Don Sherwood: he is the right man to represent the people of the 10th Congressional District from the state of Pennsylvania." The hypocrisy here is enough to make you sick.

The Repuglican Party owes a great big fat debt of gratitude to the Supreme Court of the state of New Jersey. Just ten days to go to the critical midterm elections, the court's ruling has re-energized the party's gay-bashers and reignited a hot-button issue that helped fuel the Repugs' victories in 2004. The ruling, which said that gay couples are entitled to the same legal rights and financial benefits as heterosexual couples, is breathing new life into several hotly-contested races throughout the country, where the Repugs are hoping to use it as a rallying cry and get-out-the-vote engine.

There are gay marriage amendments on the ballot in states like Tennessee and Virginia, where Repugs like Bob Corker and Sen. George Allen respectively are locked in very tight races. Allen's campaign manager said Thursday "It's an issue that's going to play a big role in the next 12 days." I guess Allen's hopeful that Virginians hate gays more than they do racist Senators. And in Pennsylvania, Sen. Rick "Man-on-dog-sex" Santorum, the biggest gay-basher in Washington, is hoping the NJ ruling will tilt support back his way after consistently trailing Bob Casey Jr. in the polls by double-digits.

It's getting real ugly out there folks. The Repugs' attack ads are getting more personal, more deceptive and more vile. And now the BooGAYman has surfaced again. But will Americans be stupid enough to fall for this infuriating crap once again? Will they forget about Iraq, terrorism, North Korea, Iran, Hurricane Katrina, gas prices, oil prices, stagnant wages, rising interest rates, scandal and corruption and instead be suckered into believing Karl Rove's bullshit that gay marriage should be the biggest problem in their lives? Like I said, I'm still optimistic that Americans will do the right thing on Nov 7th. I hope I'm right.
Posted by The Ostroy Report at 6:45 AM

It's not just the ugly, homophobic politics of these hypocrites that is disturbing but the attack on the judicary is possibly even more disturbing.
One thing Bush has been all about is tipping the balance of power in the federal government toward the executive. This is a long range strategy by radical right wingers who care nothing for democratic ideals or tradition. They want power, all of it.
Witness G. W.'s comments on the New jersey Supreme Court. He dismiswed them as "...yet another activist court." Another activist court, right, the supreme court of a state has been taken over by dreaded liberal activists! That's such bull shit!
I just came from the polling place where I took advantage of early voting to vote a straight Democrat ticket! I hope we throw these bums out, though here in my home state of Texas I am not very optimistic.

Of course. Good catch. I've written about all these guys a million times, and know that, but once in a while the circuitry goes haywire. Thanks for alerting me to it.

this nonsence against gay people must end. They should have the same rights as each of the Bush twins have.
the right to fight and serve in Irac. etc.
The right to marry.

Last time I checked we lived in a Democracy for the life liberty and justice and persuit of all citizens.?
No?
I remain nameless as I live in Texas. enough said.

I couldn't agree more. However, I think it's important to keep in mind that Foley is not in deep trouble because he is gay. He is a sexual predator who targets the young and naive from a point of tremendous power. And the leaders of the Republican Party are grossly negligent and shameful to have covered for him. I don't like to bring up Foley when championing equal rights for gays. He belongs in a completely different category.

maybe others have seen this--if you needed any more reason to not vote for GOP-- a transcript was released of a meeting between bush and conservative press... bush displays little understanding of key facts on iraq and the press cynically makes suggestions on how to make the iraq war look more successful leading up to the elections...

Only Democrats would find "hope that Republicans would find a new-found acceptance and tolerance of gays" out of the Foley situation.

Foley is a CHILD PREDATOR, who happens to be a homosexual. There should be no tolerance for child predators, whether they are homosexual, man, woman, Republican, or Democrat.

11:10 You people are either unbelievably stupid or think you're clever when you distort another's words. The "hope that Republicans ..." was that they would become more tolerant AFTER FINDING OUT SO MANY HOMOSEXUALS WERE REPUBLICANS WORKING IN THE REPUBLICANS ADMINISTRATION. Can't you read???? There is no tolerance for child predators in society at large -- only among the Republican rulers in DC, it seems.

to ANON 11:10, you totally misinterpreted the point. Oostroy's piece was not saying because Foley is gay that repubs should have a new acceptance and tolerance of gays. I suspect what he means is that the Foley shinesd a spotlight on the fact that--like Rep. Jim Kolbe-Az, Rep. Tom Reynolds' aide Kirk Fordham, Foley, Ken Mehlman etc--there are PLENTY of gays in the republican party. and THATS why the repubs should be more accepting. Because being gay is not DEMOCRATIC-only.

Hate and race baiting have always worked for the repubs and they are using it now because they are desperate.

9:07 You're right but it's working in TN. Latest is Ford trails and isn't likely to win.

9:07 Of course it works. It appeals to people whose concept of themselves is so poor that they need to find others who are different to scapagoat and feel, without any basis in fact, superior. People so insecure should see a shrink and find a good spiritual advisor. That won't happen however, because the very defect, the feeling of superiority, precludes their getting help for that problem. And all of us in the country suffer from their defect.