Minnesota Repug Says "Stay the Course" on Iraq. GOP Bailing Out of His Losing Campaign. Klobuchar Leads By 20 Points 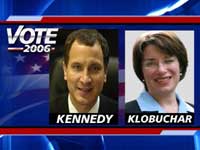 Senate hopefuls Amy Klobuchar (D), a prosecutor, and Rep. Mark Kennedy (R) battled it out on NBC's Meet the Press Sunday. It was a strong showing for Klobuchar, and a standard evasive-Republican performance by Kennedy.

On Iraq, Kennedy regurgitated the GOP party line that the U.S. must stay the course. When asked by host Tim Russert if he would have changed his vote knowing what he now knows about the lack of WMD, Kennedy said: "We acted, you know, you can't really play TiVo and rewind in the real world, but let me just say this: First of all, I stand by my vote."

Russert called him on his inaccurate predictions about the war, citing what the Congressman said 10 months ago that "Progress was clear, we’re making great strides." Russert asked, "Why shouldn’t voters in Minnesota say, 'This is rosy-colored glasses. It’s not reality. There were no weapons of mass destruction and the level of sectarian violence is at an all-time high and Congressman Kennedy is saying, ‘Everything’s fine. We’re making progress.’"

Russert continued: Speaking of predictions, Congressman Kennedy, this is what you said six months ago. "I fully expect that over the next year there will be a significant number of troops who will be returning home because of success in Iraq." Flat wrong.

Kennedy: I said in November that...

Russert: But this is February, six months ago.

Kennedy: ...in February that we expected troops. We have less troops, not as much as I would like, we've run into tougher patches...

Russert: A significant number. Why can't you say you were wrong?

Moments later Klobuchar added: "I would ask him how come he won't even admit that he was wrong about voting for this war when we are in the situation we're in, when we've spent over $300 billion, when many members of his own party have admitted that this war was not the right direction, that in fact it has fomented terrorism. That we now have 16 agencies of our own government, of President Bush's administration saying that this has added more terrorism in this world."

Russert suggested that Kennedy, who now trails Klobuchar by 21 points according to a new Star Tribune poll, is being abandoned by the Republican Party. He pointed to a recent Minnesota Public Radio interview with Minnesota Sen. Norm Coleman: "And it says here, 'Documents filed at [Minnesota television stations] KARE-11, KSTP-TV and WCCO-TV show that the National Republican Senatorial Committee has not bought or scheduled any ad time on behalf of [Mark] Kennedy....Republican Senator Norm Coleman, a Republican senator from Minnesota, acknowledges that Kennedy faces an uphill battle. Coleman said he's encouraging the campaign officials to invest in Minnesota but says they may be more concerned about other contests.'"

Lastly, as Sen. Jim Talent (R-MO) did last week on the same program, Kennedy refused to say that Bush was a great president, choosing Talent's reply instead. "I belive history is going to make that decision. This is a guy who's human, like all of us. Has made mistakes, we've all made mistakes."
Posted by The Ostroy Report at 6:43 PM

Anonymous said...
This comment has been removed by a blog administrator.
9:15 AM

Andy -- Why do you allow him to use your site as a billboard?