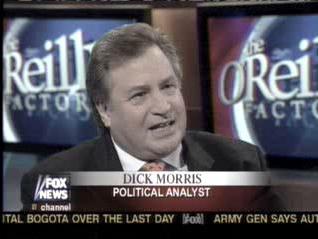 There's just 12 days to go to the midterm elections and according to the pundits and polls it appears that Republicans will likely lose the House and quite possibly the Senate as well. As a result, in the campaign's homestretch, the utterly terrified Repugs, afraid of losing power, are playing dirtier than ever (see new RNC "The Stakes" ad; Tennessee Repug Bob Corker's racist ad against Harold Ford Jr; Rush LIMPbaugh's horrifyingly inappropriate comments about Michael J. Fox; etc).

In his syndicated column Monday titled "Best GOP Hope: Scare 'em Silly," rapacious right-wing rhetoric slinger Dick Morris wrote that "Republicans won't save themselves with phony optimism--pathetic claims that, somehow, they're mounting a comeback. They need to sound a note of alarm and fill the airwaves with specifics of exactly what will happen if the Democrats triumph." And to Morris, that means lie and distort the truth about the war on terror. And why not? It's sure as hell worked like a charm in the past.

Morris suggests the following ad: "We see and hear a wiretapped conversation, with a terrorist revealing his worst plans to his associate - and, inadvertently, to government eavesdroppers, too. Then, when he's about to spill the beans on when and where the next attack is going to come, the line should go dead, with a dial tone, with a machine voice saying "This wiretap terminated in the name of privacy rights by the Democratic U.S. Congress." The announcer can then say, "If the Democrats win, the National Security Agency will never be able to listen in as the terrorists are plotting to attack us."

This type of distortion is irresponsible and reprehensible, as it once again exploits the 9/11 tragedy for the Repugs' personal political gain. Furthermore, we must remind the portly little pundit that Democrats don't have any problem wiretappings. If the Dems win, the NSA will most certainly "be able to listen in as the terrorists are plotting to attack America." We'll just do it legally, that's all.

Morris continues with: "Republicans are doomed unless they can get their base back...A message like this could have a snowballing effect on the Republican base. The word could percolate through the clutter, reminding voters of their true priorities...If the Republicans frankly address their deserting base and speak plainly of the need to hold steady in the face of the terrorist threat, the base can come back." And of course, that means lies, lies and more lies. Shame on them all.
Posted by The Ostroy Report at 7:48 PM

No one should be surprised if the Republicans vigourously, and in as low a manner as possible, fight back against their supposed demise in the near elections.
Having said that, it is still incredible that slimeballs like Morris, Limbaugh and others of that ilk have any shred of credibility with any but the most rabid right wingers.

If enough Americans to elect the Repugs fall for this again, then we should declare the country in a state of emergency and start a nationwide revision of our public schools. The emergency program should include mandatory classes for adults. The "dumbing of America" has resulted in ruinous results which could get worse. We know first hand how serious the ignorance has become by the comments made on this blog by Republicans. I'm not being sarcastic. These people cannot see facts and think clearly.

Stay tuned for the season premier of the Osama show next week.

What we need to do is run ads showing people how honestly terrified they need to be if the Republican neofascists hold control.

How about an ad of two people with kids in the military talking about organizing opposition being wiretapped by this administration?

Or how about just the footage of the Shrub saying things are easier in a dictatorship, so long as he's the dictator. Then the six or seven times when he said "stay the course", followed by clips from the last few days of various admin folks saying they never said the plan was "stay the course"

The dumbing down of America stated 30 years ago and those children are now voting adults. They ask no critical questions and blindly follow.

I too look for an Osama tape to come out on Nov. 5th or Nov. 6th. And yes there will be weak minded Americans who will fall for it again.

Yesterday on The Ed Shultz show he said how Americans are politically exhausted. I agree.

These whacko pundits really need to crawl back in the hole the came out of because they can be the most exhaustive of all the repiglicans. Anyway, I think the dumbing down of America started when they took Civics courses out of our public schools. These kids don't have a clue about civic responsiblity today. They are the entitlement generation after all.

The dumbing down of America started when the bureaucratic government took control of the education of our youth.

STOP GOVERNMENT INDOCTRINATION OF OUR YOUTH - ABOLISH THE NEA.

2:13 You are one of the DUMB ONES. The public, free education is a government program assuring an equal opporunity for all as well as assuring an educated populace. Without it we would be a third world country, which we are fast approaching because of the stupidity of some educational decisions. Some are as simple and deadly as getting rid of phonics in teaching reading,; to, as suggested, eliminating civics classes; teaching to pass a test instead of truly educating; and, heterogenous classes. A teacher simply cannot teach reading to youngsters when they are all at different levels of readiness and ability. That's when education began to fail -when classes became heterogenous. And it need not be a stigma not to be in the "fastest" class. - it's a matter of opporutnity and others circumstnaces that determine some skills. The answer is to teach all to read, think, learn and excel and this can only be done when the circumstances are supportive. No Child Left Behind is yet another blow to a good educaiton for our children. But certainly public education is a cornerstone of a democracy and a civilized society.

You know Morris is one of the reasons I really disliked Clinton. If you recall, Dick Morris was one of the architects of the Bill Clintons early years. That he has become a sleazy slimeball turncoat right wingers isn't a suprise. He'll go wherever he bread is buttered.